Since 2013, a project has been taking place in Armenia where the goal is to reintroduce Caspian Red Deer in Armenia and maintain thriving populations of this subspecies in the country.

In 2018, the first import to Armenia took place, but they were not released into the wild as that would have been too risky. Instead, 14 deer were brought to a special Red Deer Breeding Centre inside the Dilijan National Park. The aim was to eventually be able to release deer born in the breeding centre into the wild in Armenia.

The project “Reintroduction of the Caucasian Red Deer (Cervus elaphus maral) in Armenia” is a colaboration between WWF Armenia and the Armenian Ministry of Environment, with support from the German government through the KfW Development Bank, WWF Germany and Caucasus Nature Fund (CNF). 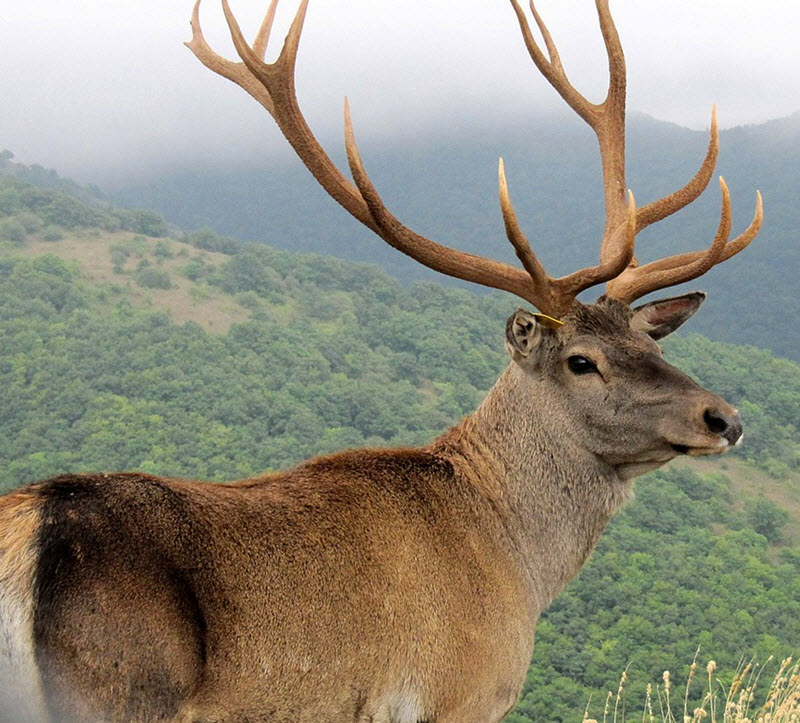 About the Caspian Red Deer

The Caspian red deer (Cervus elaphus maral) is one of several extant subspecies of Red Deer. It is one of the eastern subspecies, and is native to the region between the Black Sea and the Caspian Sea, including Crimea, Asia Minor, the Caucasus Mountain region, and along the Caspian Sea in Iran.

The Caspian red deer is also known as Caspian deer, Eastern red deer, Noble deer, and Maral. It lives in social groups and eats a variety of grasses and leaves. When it kind find them, it also likes to feast on berries and mushrooms. The Caspian deer is an important prey species for Persian leopards. They also also preyed on by wolves and brown bears, and historically by the now-extinct Caspian tiger.

About the Caspian Red Deer in Armenia

Armenian is within the native range of the Caspian Red Deer and the country used to have thriving populations of it. As recent as the mid-1950s, it was still a common deer in the forests of Northern, Easter and Southern Armenia. Since then, the population has declined dramatically, chiefly due to habitat loss and poaching. It is listed as Critically Endangered in the Red Data Book of Armenia. A driving force behind the poaching of Caspian Red Deer is a high demand for velvet antlers in parts of Asia, as they are used in traditional Chinese medicine. (During the time of the Soviet Union, this demand was met at least partly by Soviet deer farms.)

Reintroducing Caspian red deer to Armenia – which steps have been taken so far?

Returning the Caspian red deer to the Armenian fauna is complex task, since simply setting some individuals free in the forest would put them at high risk of being poached. The project has therefore been working step-by-step to create a situation into which Caspian red deer can be reintroduced in a safer manner. The project has set-up a breeding centre for Caspian red deer in Dilijan National Park and operates it as a part of the program. The idea is to breed deer in captivity (but in a natural environment) and then release them into national parks or reserves.

In 2012, WWF Armenia carried out feasability studies for the reintroduction of Caspian red deer to the Dilijan National Park and the Shikahogh State Reserve. Based on these studies, suitable reintroduction areas with good carring capabilities were picked out.

The first animals for the breeding centre in the Dilijan National Park were 14 individuals imported from Iran. Three of them were a gift from Iran to Armenia.

The breeding centre is large and includes a 10 hectare open-air enclosure for the deer in the breeding program, a depot for grass and fodder, several feeding places, and a water supply. There is also a house which serves as the breeding centre´s office, and solar panels have been installed to supply electricity.

A security system is in place to prevent poaching and predators, and one of its components is the electric fences surrounding the open-air enclosure.

By 2021, a total of 13 fawns had been born in the centre. The first release is planned for 2022, and will be a group of five individuals. After this, the hope is to be able to release 5-10 individuals per year from the breending centre.

Examples of education and outreach activities: