In the late 1900s, the World Wildlife Foundation (WWF) joined forces with the local city and county to begin a restoration project at Asköviken, a degraded bay and wetland area in eastern Sweden. This project has been highly successful and the area is now famous for its thriving birdlife.

The part of the Asköviken project which was partly funded by LIFE – a European Union funding instrument for the environment and climate action – was completed in 2008. Since then, funding comes chiefly from the Västmanland county administrative board, which is carrying out important maintenance work and continue to improve the Asköviken wetland and bay environment.

The projected started in 1990, when WWF created the Asköviksfonden (The Askövik Fund) in colaboration with the city of Västerås and the Västmanland county administrative board. Asköviken (the Askö bay) is a shallow bay in the freshwater lake Mälaren, and at this point in history the formerly open meadow environment flanking it had been degraded into a bushland overgrown by low thickets. Before industrialization, grazing animals and farmers carrying out old-fashioned meadow hay production had kept the landscape open, but they were no longer present and this had proved detrimental to the flora and fauna that thrive in open and semi-open environments. 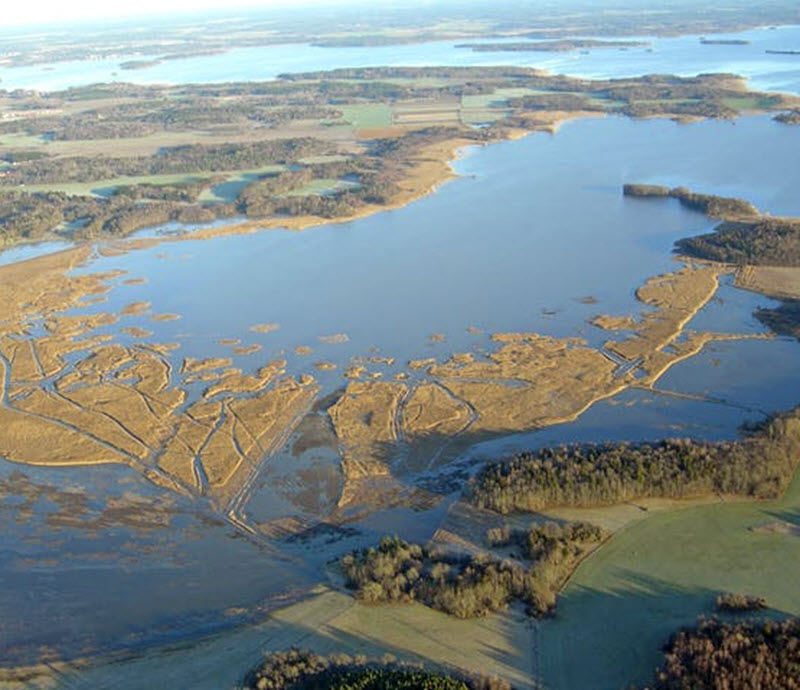 By 2020, 255 different bird species had been observed at Asköviken, including 118 species that reproduced there.

As a part of the project, a watchtower has been erected at Asköviken, alongside several hiding spots at ground level where careful birdwatchers can get close to the birds without scaring them or causing undue stress. At Lövsta, the birdwatcher´s hiding spot is accessible by wheelchair.

The area is also home to three observation platforms.

Several hiking paths have been established near the bay, both to make the area more accessible for visitors and to prevent wear and tear outside the paths. As a part of this, a small footpath bridge has been built över the Askö creek.

Tip! Rudöklippan (the Rudö cliff) is a natural observation spot that will give you a great view over the bay.

The project “Naturskolan i Asköviken” (The Nature School at Askö Bay) makes it easy for schools to bring their pupils to Asköviken for educational experiences. At the time of writing, over 70 000 pupils have participated in nature school educational days at Asköviken.

In the fall/winter of 2019-2020, a new project was carried out to further improve the situation for reproducing wetland birds. Among other things, new tiny islets suitable for nesting were created by the promotory Tornudden, and some of the reed channels were widened.

A recent study have yielded some very encouraging results:

Asköviken as a resting spot for migratory birds

Many species of bird only live in the Nordic countries during the warm season, when they reproduce, and will leave for warmer climates before the winter sets in. For many of these migratory birds, Asköviken has become an important resting spot on their journey north or south.

About the Asköviken-Tidö Natural Preserve

Asköviken-Tidö is a natural preserve in Västmanland, located along the edge of Mälaren, Sweden´s third-largest lake.

The land was declared a nature preserve in 1985, and then extended in 1991. Today, it encompasses 896 hectares, of which 551 hectares are land and 345 hectares are water.

The landscape here includes several different habitat types, including open wet meadows, pasture land, and lush decidious forest. The area around Tidö castle is an old castle parkland with large oaks. The European mistletoe, which is not just endangered in Sweden but also the county flower for Västmanland, grows here.

Since the natural preserve is also a bird protection area, some specific rules are in place to protect the birdlife. Make sure you follow the rules announced at the natural preserve. You can obtain more information from the Västmanland county administrative board.

A few examples of important rules: