The Apollo butterfly (Parnassius apollo) is one of the most threatened species of butterfly in Europe, mainly due to habitat loss and habitat fragmentation. Therefore, the LIFE Apollo2020 project has been launched to help save and promote the populations in Poland, Czechia and Austria. The Karkonosze National Park in Poland serves as the coordinator for the project.

There are many different subspecies of Apollo butterfly, and some of them are endemic to a very small location, e.g. a specific valley in the Alps. The species in itself is classified as Least Concern by IUCN, but the situation is much more precarious for many specific geographical populations and certain subspecies. Examples of countries where the Apollo butterfly is a protected species are Liechtenstein, Poland, Czechia (where it has been declared critically endangered), and Turkey.

Regrettably, the legal protection often pertain to the protection of individual butterflies rather than the safeguarding of the habitats they require for their survival. Still, a number of projects have been launched with a more habitat-focused approach, such as the conservation program in Poland´s Pieniny National Park which successfully (through a combo of habitat protection and captive breeding) saved a subspecies which had declined to just 20 individuals in the early 1990s. There are also projects in southwestern Germany where shepherds and their flocks strive to ensure favourable habitat conditions for the Apollos. 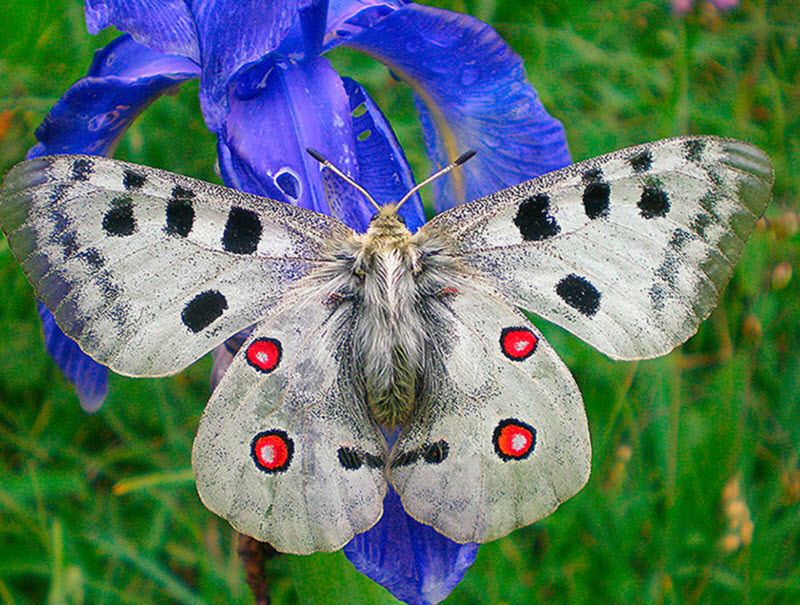 About the Apollo butterfly

The native range of the Apollo butterfly includes both Europe and Asia.

The preferred habitat of the Apollo butterfly is hills and flowery mountain meadows and pastures. Because of this, it is also known as the Mountain Apollo. Its normal range is from 400 metres to 2,300 metres above sea level, but it is much less common in the 400-1000 metre range than higher up.

The Apollo butterfly population in Europe has decreased by 20-50% over the past 25 years, chiefly due to habitat loss and habitat fragmentation. This species needs wide open spaces, preferably lawns where the shrub cover is less than 5%. Adult Appolos are seen from May to September, and feed on flower nectar.

Unlike many other butterflies, the Apollo spends two years as a caterpillar before turning into a reproducing adult, and this makes the species extra vulnerable.

The caterpillars feed on stonecrop species and Sempervivum (house-leeks), and having access to sufficient amounts of these plants is crucial for the species survival.

The aim of the LIFE Apollo2020 project is to re-establish Apollo butterfly populations in Czechia and Poland, and strengthen the existing population in Austria´s Alpine bioregion.

252 ha of habitat land will be prepared to ensure that breeding Apollo butterflies are protected and have sufficient food. In conjunction with the safeguarded stepping-stones for migration, the hope is to achieve strong and resilient functional areas in the Sudetes, the Austrian Alps and the White Carpathians. (The Sudetes is a mountainous border region where Poland, Czechia and Germany meet.) An important part of the project is to connect breeding sites (comparatively dry sites with host plants for the caterpillars) with feeding sites (semi-wet meadows with flowers that produce nectar for the flying butterflies).

Specimens from natural populations and butterfly farms will be released into the wild in restored and newly prepared habitats in the Sudetes (8 sites), the Austrian Alps (up to 5 sites) and the White Carpathians (8 sites).

Land of Apollo & Gardens for Apollo

As a part of the outreach efforts, the project will help create Gardens for Apollo; secondary stepping-stones for butterfly migration that will also raise awareness and promote a social commitment to the survival of the Apollo butterfly in Europe and the need for connected wildlife habitats.